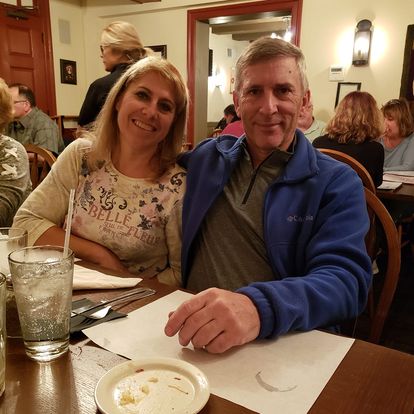 Have you ever had an idea for how you wanted to perform a task, only to be forced to change it at the last minute?

I had an awesome (if I do say so myself) topic for next week’s blog.

Then my world took a turn no one expects.

A turn we all pray never happens.

Some of you may know we’ve been dealing with my husband not feeling well for the past several months.

After a couple of misdiagnoses, it turns out he has a cancerous tumor in his throat, very close to his vocal cords.

It’s not operable. Which means chemotherapy.

Within two weeks of diagnosis, he’s already doctor’d out. And he hasn’t even started treatment yet.

We are extremely fortunate that we have a massive support system surrounding us.

And an amazing team of doctors guiding us through the entire process.

Those of you who know me know that I try to always find the positive in things. Do I get cranky? Of course. I’m human.

So where’s the positive in this situation?

First, we are stronger as a couple and as a team.

And that’s saying something. Because before this diagnosis, had you tried to drive a wedge between us with a sledgehammer, you would NOT have succeeded.

Fahget about it, as my Boston friends would say.

Today, while I was sitting with him in recovery after his chemo port was put in, he apologized for messing up my day.

I told him he didn’t mess anything up. I’m exactly where I’m supposed to be today.

Did I have client work to do?

But my clients are part of my support system and they’ve all been amazing about reschedules and some delays.

For which I am eternally grateful.

So, the second thing this has done for us is that it has given us a new perspective.

A new perspective on what’s important.

A new perspective on relationships.

A new perspective on family.

We’re both fortunate to be entrepreneurs. No clock to punch. No taking sick leave or PTO or whatever it’s called these days.

And we’re already talking about “after”.

Because of the location of the tumor, eating is a challenge for him.

So first, “after” for him personally is going to be a big, juicy cheeseburger.

Because eating is something we all take for granted. Until we can’t.

Beyond that, there are things we’ve wanted to do, but haven’t because of commitments.

Like activities. Fun things we’ve wanted to do, but haven’t.

There’s too much life to live out there.

Too many things we haven’t done.

Too many people we haven’t met.

And again, being entrepreneurs means we can work from anywhere.

And that’s the plan.

So what’s my message today?

Don’t put it off. Because you never know when you won’t be able to eat that cheeseburger.

Stay safe and healthy, my friends!

We use cookies on our website to give you the most relevant experience by remembering your preferences and repeat visits. By clicking “Accept All”, you consent to the use of ALL the cookies. However, you may visit "Cookie Settings" to provide a controlled consent.
Cookie SettingsAccept All
Manage consent

This website uses cookies to improve your experience while you navigate through the website. Out of these, the cookies that are categorized as necessary are stored on your browser as they are essential for the working of basic functionalities of the website. We also use third-party cookies that help us analyze and understand how you use this website. These cookies will be stored in your browser only with your consent. You also have the option to opt-out of these cookies. But opting out of some of these cookies may affect your browsing experience.
Necessary Always Enabled
Necessary cookies are absolutely essential for the website to function properly. These cookies ensure basic functionalities and security features of the website, anonymously.
Functional
Functional cookies help to perform certain functionalities like sharing the content of the website on social media platforms, collect feedbacks, and other third-party features.
Performance
Performance cookies are used to understand and analyze the key performance indexes of the website which helps in delivering a better user experience for the visitors.
Analytics
Analytical cookies are used to understand how visitors interact with the website. These cookies help provide information on metrics the number of visitors, bounce rate, traffic source, etc.
Advertisement
Advertisement cookies are used to provide visitors with relevant ads and marketing campaigns. These cookies track visitors across websites and collect information to provide customized ads.
Others
Other uncategorized cookies are those that are being analyzed and have not been classified into a category as yet.
SAVE & ACCEPT